It can be easy to spot someone who has filariasis as one of the severe symptoms of the disease is an uncontrollable swelling of the legs (elephantiasis). Filariasis – or lymphatic filariasis – is spread by mosquitoes, and can cause permanent disability if not treated quickly. Learning how to control the spread of mosquitoes and prevent mosquito attacks could be the only way to protect yourself against the mosquito-borne disease. Find out all you need to know about filariasis below.

Filariasis is a tropical disease that affects more than 120 million people worldwide. It is caused by tiny parasitic worms belonging to the family ‘filaridea’, and is transmitted by mosquitoes. When a mosquito bites a human, it creates a hole into which it deposits the larvae of filarial worms.

These larvae worms travel through the body into the lymphatic system, cutaneous tissues or elsewhere in the body cavity and become adults. Adult filarial worms can live in the body for anywhere between 6-8 years, mating and giving birth to millions of larvae.

Filariasis may also be called ‘lymphatic filariasis (LF)’ due to the damage it causes to the lymphatic system.

Where is filariasis most common?

Filariasis was first recorded in India in 6th century B.C. and again in 7th century A.D, with Madhavakara describing the signs and symptoms of filariasis in his Madhava Nidhana.

The mosquito-borne disease has now spread to approximately 83 countries across the world with India, Indonesia, Nigeria and Bangladesh collectively seeing 70% of all cases. It is known as the world’s second leading cause of long-term disability, with an estimated 1.1 billion at risk of acquiring the disease. Other areas where filariasis is common include America, South East Asia and the Pacific Islands with migration connections to Australia.

Cases of lymphatic filariasis have been reported in 20 states and union territories across India, affecting approximately 650 million people. And, while the National Health Policy had set an initial goal in 2012 of eliminating LF from India by 2015, the deadline has since been extended to 2017, and again to 2020 – although the target is still unlikely to be met. 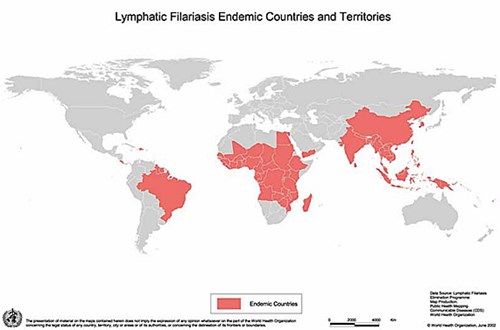 This map should not be used for navigation or legal purposes. It is intended for general reference use only.

What are some common filariasis symptoms?

Most people who are infected with filariasis will be asymptomatic, not showing any external signs of infection – although they will have hidden damage to their lymphatic systems. If you have filariasis and are asymptomatic, this could last for years before any external effects are seen. If you have acute or chronic filariasis, symptoms will initially include painful swelling and inflammation. If the infection worsens, it could eventually cause permanent disability. Some signs and symptoms of lymphatic filariasis include:

What type of mosquito causes filariasis?

Unlike other mosquito-borne diseases such as dengue fever or malaria, the type of mosquito that causes filariasis depends on the type of filarial worm in question.

Find out more about the types of mosquitoes – and other vectors – that are responsible for the world’s most common diseases in our piece on the topic.

How do you prevent filariasis?

Currently there are no vaccines available for filariasis, so preventing mosquito bites will be the best form of defence. Some other steps you can take are:

How do you treat filariasis?

If you believe you have been bitten by a mosquito and have contracted filariasis, you will be asked to take a blood test to diagnose the disease. Your doctor will likely ask for this to take place at night as this is when the filarial worms are likely to appear in blood.

Filariasis is one of the most severe and distressing of the diseases transmitted by mosquitoes, but, thankfully, there are drugs to fight off the infection in its early stages. You will be given a single dose of two medicines, and they should clear the microfilariae from your blood stream. If the condition persists, and the disease enters the later chronic stages, you can also undergo surgical procedures. Surgery will aim to drain the lymphatic system of its menacing residents.

Disclaimer: Mortein does not make any warranty that by using these products you will not contract the diseases referred to in this site. Use Mortein as part of a complete preventative plan and please still take caution. Seek a medical professional for further advice in regard to the above, especially if visiting prone areas.